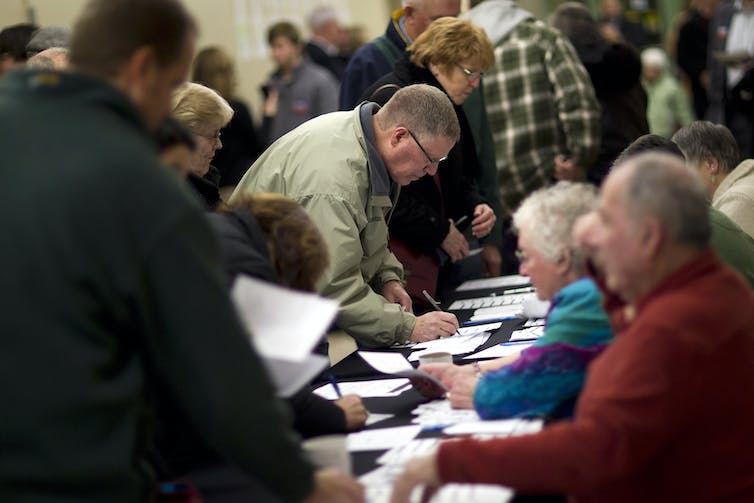 On Jan. 3, 2012, voters sign in on caucus night at Point of Grace Church in Waukee, Iowa. AP/Evan Vucci

The first and most visible test of candidate support in the 2020 presidential election is the Iowa presidential caucus, which takes place on Feb. 3.

While Iowa does not control who becomes the candidate of each party, Iowans’ choices almost always end up matching the rest of the nation.

One of the architects of the modern Iowa caucuses, which began in 1972, wrote that the significance of the caucus was unanticipated.

“Never in our dreams did we realize we would be ‘first in the nation,’ nor did we ever expect anyone outside Iowa would pay much attention,” retired Iowa State University engineering professor Richard Seagrave wrote.

“Remember that we had no ‘user-friendly’ computers or high-speed copy machines in 1972,” wrote Seagrave.

The significance of first-in-the-nation placement did not become clear until a barely known governor of Georgia, Jimmy Carter, came to Iowa in 1976 to test the waters for a presidential run.

That year “Uncommitted” got 14,508 votes (37%). Carter came in with 10,764 votes (27%), but was declared the winner. He went on to get the nomination and win the presidency. The fact that a relative unknown – spending little money but lots of time and face-to-face campaigning – could win was surprising. 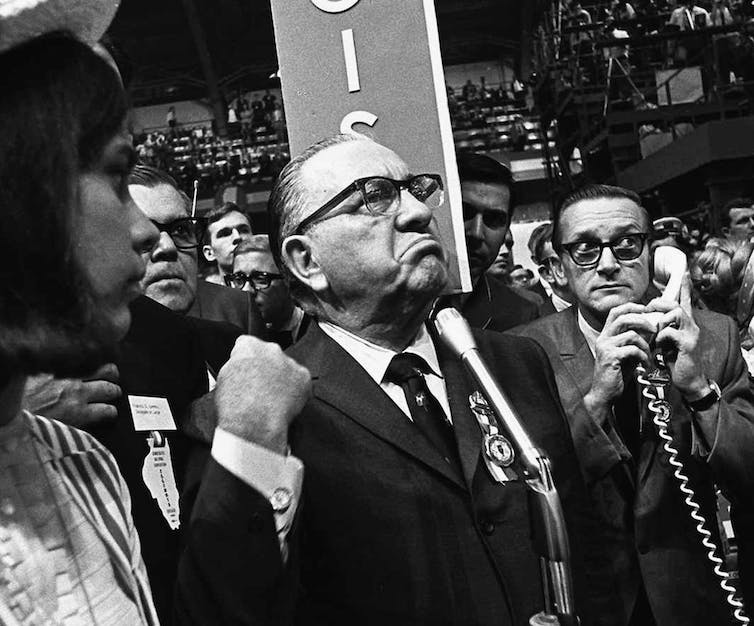 Pendergast once told The New York Times, “When a poor man comes to old Tom’s boys for help we don’t make one of those damn fool investigations like these city charities. No, by God, we fill his belly and warm his back and vote him our way.”

A vestige of that political era lasted into the second half of the 20th century, when the actions of Chicago’s longtime political boss, Democratic Mayor Richard Daley, led to a profound change in the presidential candidate selection process.

The 1968 Democratic convention took place in Chicago, a city tightly controlled by Daley. His operatives had long seen to it that people voted for Daley and his chosen candidates.

But 1968 was a year of violence related to race and the Vietnam War. Riots disrupted the convention. Mayor Daley used his police force to crush the protests.

All of this was covered live on television. The violence and bias threatened to taint the Democratic Party.

The Democratic Party created the McGovern–Fraser Commission in 1968 in response to the events in Chicago. The new rules changed the party’s presidential nominating process in an attempt to make them more systematic and transparent, as well as to encourage more participation by minority groups, young people and women roughly proportional to their numbers in states.

It was these reforms that launched Iowa’s caucuses in 1972.

In 1976, the Iowa Republican Party followed the Democrats, and they began holding caucuses on the same early date.

That increased the visibility of the Iowa caucuses out of proportion to their actual numeric influence in the nominating convention, where in 2020 Iowa will send only 49 delegates out of the estimated total of 4,594 Democratic delegates.

In fact, the caucuses are in large part a media event, a beauty contest, as scholars Hugh Winebrenner and Dennis J. Goldford have suggested.

A legendary event occurred in 2004, when Vermont Gov. Howard Dean, who came in third, was cheering on his supporters as he contemplated a national campaign. But a microphone malfunction amplified his enthusiasm. What become known as the “Dean Scream” tanked his candidacy.

In 2008 a first-term senator, Barack Obama, won the Iowa caucuses, propelling him to a hard-fought nomination and two terms in the White House. 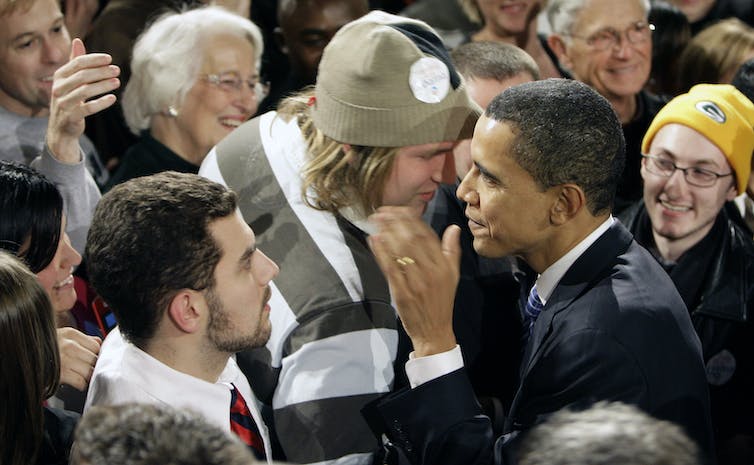 How they do it

On caucus night, registered Democrats and Republican voters gather at roughly 1,700 precinct meeting places. These have been schools, libraries, churches, fire stations and people’s homes. In 2020, Democrats will also have satellite caucuses, some even held overseas.

There are speeches by supporters for each candidate who gather into groups for each candidate. The numbers in each group are counted. For a group to be “viable,” they must have 15% of the all the participants in that precinct. Otherwise that candidate is declared “nonviable” and the supporters are asked to join another candidate’s group or remain undecided.

Once the viable groups have been declared, a complex mathematical calculation determines how many delegates are allocated to each surviving candidate.

The Iowa caucuses become a tradition

The Iowa caucuses have become a well-watched political tradition because the media devotes so much attention to the candidates’ activities in Iowa and then how they perform on caucus night.

Criticisms have emerged. Iowa’s small and mostly white population has subjected the caucus to the charge that it is not representative of the nation as a whole.

A recent USA Today/Suffolk University poll attests to that concern:

A 57% majority agreed that holding the opening contests in Iowa and New Hampshire was a good system “because it forces candidates to talk directly to voters.”

A 52% majority also agreed that holding the opening contests in Iowa and New Hampshire wasn’t a good system “because the two states don’t reflect the nation’s diversity.”

There is also a concern that caucuses are difficult events to participate in because voters must attend personally and at night. The turnout rate of eligible voters is low, hovering around 10%, while primaries normally have turnout of 35% or more.

In 2020, there is renewed debate about how Americans should select their candidates for president. Caucuses are now generally in disfavor, with many states moving to primaries.

One thing is clear. As American candidate selection evolved from the days of political bosses to today’s caucuses and primaries, that process will continue to evolve.

[ You’re smart and curious about the world. So are The Conversation’s authors and editors. You can read us daily by subscribing to our newsletter. ]

This article is republished from The Conversation under a Creative Commons license. Read the original article.

Welcome to the discussion.

Keep it Clean. Please avoid obscene, vulgar, lewd, racist or sexually-oriented language.
PLEASE TURN OFF YOUR CAPS LOCK.
Don't Threaten. Threats of harming another person will not be tolerated.
Be Truthful. Don't knowingly lie about anyone or anything.
Be Nice. No racism, sexism or any sort of -ism that is degrading to another person.
Be Proactive. Use the 'Report' link on each comment to let us know of abusive posts.
Share with Us. We'd love to hear eyewitness accounts, the history behind an article.